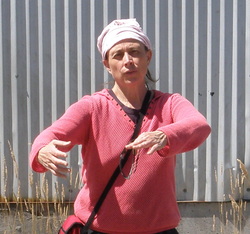 The main emphasis is awareness of embodiment and pleasure of moving/dancing with self and other. We work with deep sensing techniques such as Material for the Spine, Qi Gong, Feldenkrais-influenced movement guidance, Contact Improvisation and moving in sensation. We use Tuning Scores to collaborate and compose dances in real time. See more about these practices below.


In her teaching Karen Nelson offers an integrated rendering of the distinctive approaches to dance improvisation and embodiment practices that she has passionately studied, taught, practiced and performed for over 35 years. Such work/training includes:

·      Material for the Spine, a system of movement developed by Steve Paxton involving sensations of the skeleton, reflex, inherent spirals of human movement, perfect forms, energy extension and relationship with gravity. Many specific exercises point to experiences that reveal useful and unusual ways for moving and improvising.

·      Tuning Scores, developed by Lisa Nelson, provide tools to use during an improvisation to understand the compositional choices we make. Actions as well as verbal calls are used to communicate between players. Warm-ups include deep perceptual awareness “games” that allow delightful, unpredictable dancing to emerge, often "waking-up" our inner choreographer while in the midst of improvising.

·      Contact Improvisation originated by Steve Paxton and others in 1972, is a form Karen has been practicing, teaching and performing since 1977. She considers this foundational movement technique to be a boon to any dancer or person who enjoys moving – in solo or with a partner/s.

In the mid-70’s at Naropa Institute in Boulder, Karen met and worked with Barbara Dilley whose invention “Contemplative Dance Practice” remains a strong ritual way for her to dance and share meditation time with others. Karen’s classes also often include a short qi gong practice known as Shibashi, an effective grounding, centering and awareness warm-up for entering improvised dancing.